What is this world coming too? 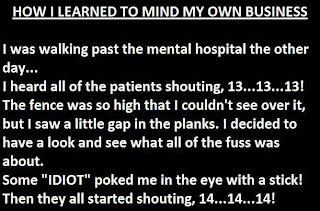 Every day you hear about discrimination against this group or that group. Whether it be against gays, African Americans, whites, Hispanics, women, religions, . What in the hell is the matter with some people these days? Has everyone gone bananas? Why doesn’t everyone mind their own damn business? It might provide a little help in restoring some kind of sanity in this God-forsaken world that has been turned into a world of people just looking to get their name or mug shot into the news at the expense of other people’s reputations.

I would be willing to bet that a lot of these people who criticize others, are doing it because they would like to try whatever it is that they are criticizing others for, but they do not have the guts to do it themselves.  I would call this type of people hypocrites. They are denying their true feelings because of being gutless.  Still, they want to make others think that they are the best in the world and could never do anything wrong to harm their own reputation. But they find it appropriate to try and make other people’s lives miserable because of their goodie two shoes appearance and conduct.

I’m no different than anyone else. I like to criticize but my criticism is mostly against politicians that for most part don’t know what it means to be truthful. Then I also write about what I call funny people. I like to walk down a busy street on a beautiful day when the sun is shining and observe what some people do while walking by themselves. Some of them do things that are really comical and some, well, I would say are so gross that they should be on a funny farm. It’s unbelievable to see and hear. They act that way and they seem not to be oblivious of their surroundings. I must say that some are comical like I said, but others seem to be in need of help mentally. I know I should not find that comical because some of them do need help, but some are so comical that a person can’t help but laugh.  In any case there's a difference I'm not envious, or angry at these people (politicians aside at times).

I wonder if I have been watching them too much. Sometimes I start talking to someone although I’m alone but in my mind there is someone else here with me. I’m wondering if its old age doing that or am I going bananas from watching others?

That’s my little rant of the day. Have a good day and watch out for the funny people - maybe including me.
Posted by Unknown at 7:52 AM