The premier of Ontario Wynne, as you probably know if you read my blog, does not have a fan in me. This premiere is trying to do away with mother and father. I'm not kidding. How do you know when you've gone too far? Common sense says she past that point years ago, but she clearly doesn't realize that she has. Hopefully voters in Ontario are starting to realize it by now and boot her out in the next provincial election.

“Mother” may soon be replaced in Ontario law by the term “birth parent.”

That’s what’s incorporated in amendments contained in the Liberal government’s proposed Bill 28 which is designed to change the “Children’s Law Reform Act, the Vital Statistics Act and various other acts respecting parentage.”

Premier Kathleen Wynne’s government says a new All Families Are Equal Act will modernize the definition of families.

Well, I would say that she must have been reading one of my rants. A couple of weeks ago I wrote a blog post on that issue stating that we don't have a father but a dad and stated why I said that. Father I believe is reserved for God. Now if we don't have a father down here because our Father is God. He was our creator and not a priest or Pope. But if the premier of Ontario wants to do away with father and mother then tell us who is our mother? And tell us why? And if you can't do that then stop picking on people and try to find something to try and make them do. I'm from Ontario originally and as long as you're the premiere there are quite a few of us that will not go back and be governed by a dictator.
Posted by Unknown at 8:58 AM No comments:

So-called singers can't even sing a Christmas song without changing it into what they think it should be. A song their way turns out to sound like a pile of rubbish.

Some of them will sing them like they should be sung but there are quite a few that think they should sing it their own way which is garbage.

Here is what I mean. One afternoon before Christmas, at 4 pm I heard a female started to sing a Christmas song and she started it on so high a note that at the last she sounded as if she was screaming it. The note she started on was so high I couldn't even tell the title of it and couldn't understand most of the words. Some of those singers will even forget the melody and improvise on how it should be. I say if they don't know it in the first place they should not attempt to sing it and make a massacre of it. I've been listening to those Christmas songs for so many years that I know how they should be sung. What gets me are those singers get paid to massacre songs and that should not be.
Posted by Unknown at 8:50 AM No comments:

Here is proof that the Liberals don't care how they spend the taxpayers' money. Now they are talking about building that hospital in Ottawa in Tunney’s Pasture while knowing that they could save some money by building it across at the experimental farm where they wouldn't have any buildings to demolish. This is proof of the spending that they do. Do they think that every citizen has a money tree growing in their backyard? Those Liberals have no respect for the taxpayer's money and they don't care how they spend it just as long as they get what they want.

I said before that the Liberals are for Liberals and no one else. Also if they think that they are going to boost the reputation of their party by having someone like the premier Wynne of the province of Ontario (and I don't care if she is provincial or federal she is still a Liberal), it's a poor example of a politician and a poor example for a party to have someone like her.

A couple of weeks ago her picture was on Facebook and she was standing there with her left arm in the air and the writing below that picture stated that she had trained Trudeau. Her exact words were "I trained Trudeau". If she has any brains I think they entered at the wrong end of her body she should hang herself upside down and shake for about half an hour and see if whatever little brains that she has will go to where it belongs in that empty thing on her shoulders called a head.
Posted by Unknown at 8:49 AM No comments:

A rant in pictures

I have been having a running issue with my landlord.  Rather than ranting about it, I thought I'd share a few pictures of my place along with my commentary so you can decide for yourself if it's just an old man ranting or if you think I have some legitimate concerns. I'm confident you'll agree with me though. My landlord is an uncaring and greedy crone, who has the common sense of a turnip.

Pictured below are the step to go in my apartment. The drop is 18 ½ inches and it's been like that for 2 years now. She has had the other exits to the building for other tenants fixed but not mine. Keep in mind I'm over 80 years old.  My entrances was the most dangerous one of the bunch and she had even said so herself but she had the other ones fixed and not mine. When I called the man that had repaired the entrances he answered that he would have to call Judith. That tells me that she had never mentioned mine at all to him. 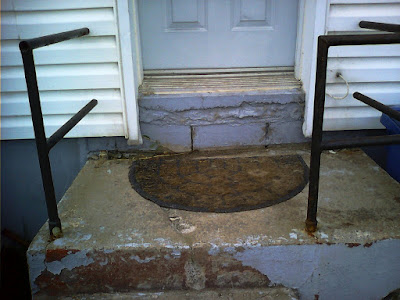 This is a picture of the hole in the wall going into the kitchen area. 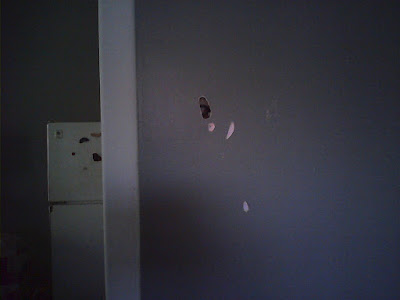 In the picture below, the ceiling has a hole in it.  They came in to fix a leak in the upstairs bathroom from the another apartment. Now it doesn't impact day to day life but it's unsettling to be eating and not only hearing the people above flushing their toilet but also to hear them going to the bathroom.  I mean every detail of it can be heard. 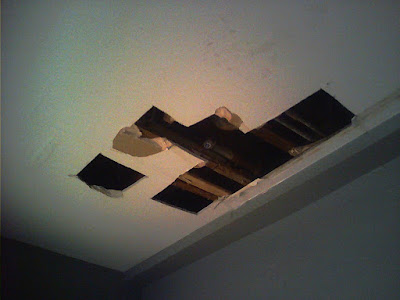 Now in this case the first leak was fixed.  But when the second one happened and then fixed the landlady said "I’ll leave it like that to make sure it doesn’t leak again after it's been repaired".


The plumbers fixed it but the landlady never bothered to inquire about whether there are still leaking issues.  It's been over 3 months now. When people walk upstairs, if there is any dust we get it and our kitchen table below it and when one of those drunks vomit in the toilet we hear it as if it was down here. In that case there goes ones’ appetite or it comes back up.

And she has the nerve to ask me for more rent, telling me that I was the paying the lowest rent of all the tenants here.That’s too bad for her. I signed a lease for $595 a month and that’s what I’m going to pay until the end of my lease (which is the end of September 2017). Then I’m leaving. So if my lease is renewed it will not be my doing. In fact she will be getting an email to that effect like she does with everyone else. After 18 years where I was living before moving here, that house was demolished to put up a triplex. Anyone can see I don’t like moving and I still don’t, but it will be a great pleasure in moving from this place.

Here are a few more pictures for your consideration. This one is a wider angle picture of my front entrance. The stove that I moved when I came in to put up my stove 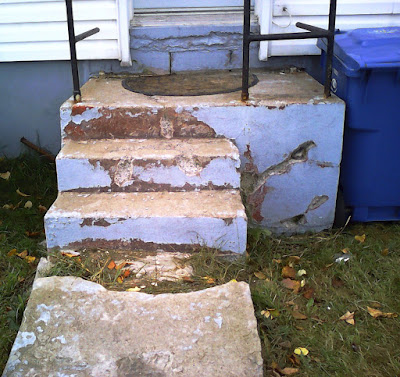 When I moved my stove in and the old stove out, these are the stairs I had to navigate.  Speaking of stoves, this was also supposed to be cleaned when I moved in. This where the old stove was. 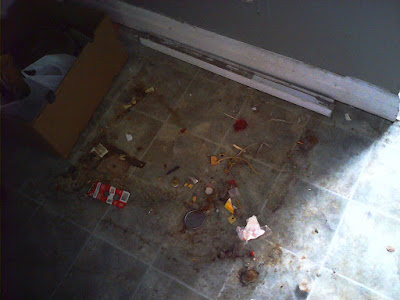 One more gripe I have since I am on the subject.  My granddaughter drives from almost Toronto to come and see me.  It's a 4-5 hour drive for her. She can only spend about an hour or two here before having to leave to return home. I had asked the landlord if my granddaughter could park just at the start of the driveway and she said okay. But this guy with his little car started to park there and I told the landlord about it and the answer I got was that she didn’t promise me anything. In the meantime there’s a long driveway that no one parks in for the building.
Posted by Unknown at 7:35 AM No comments:

The war on Christmas

I watched this video and had some thoughts but there have been so many lies on the internet about the end of the world (and other things) that it's hard for a person to make up their mind as to what is the truth and what isn't. So I would suggest that you watch this and make up your own mind.

Posted by Unknown at 6:24 AM No comments:

Email ThisBlogThis!Share to TwitterShare to FacebookShare to Pinterest
Labels: Christmas, war on Christmas

Everyone it seems, were trying to crucify Donald Trump when he was running to be the next president Now that he has been elected they are still after him.

I mentioned in a previous blog post that he might act as like dictator and in some ways so far he would seem to be acting like one. But he hasn't taken office as the president yet. Until that time let's see what he does once he has started as the president, and after he's finished doing what he said he was going to do. So far it's way too early to tell what sort of president he will be.  Why not just wait and see before condemning him without knowing how he's going to act?
Posted by Unknown at 6:23 AM No comments:

Email ThisBlogThis!Share to TwitterShare to FacebookShare to Pinterest
Labels: Trump

How to go about losing friends 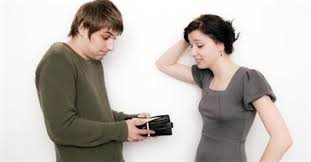 I found a new way to lose friends without saying anything to them. I say that because sometimes it's good to rid yourself of people who claim to be your friend but really just want things from you. Anyway, all you have to do is to lend them money and then they don't want to pay it back (or they can't afford to pay it back) so they stay away.

Those are the type of people that come along and say can you lend me $10 or $20 until my welfare money comes in? But when their welfare comes in, they forget where you live. Just one thing that they do wrong; they forget that if they had to borrow before their welfare came in they will probably have to borrow again. Well my door will not open for them they can starve if they must.
Posted by Unknown at 5:09 PM No comments: