UPDATE:  Link was broken, it is now fixed.

Do you think that making this kind of statement will make any difference to Mr. Obama?  I would say if you Americans had a president that was less interested in playing golf and more interested in  looking at what he was doing to the nation, then maybe the type of statement McCain made might have an impact. Then Obama might listen and start doing the job of leading the nation, instead of weakening it.  Then he might be a leader of a nation that used to be feared and/or respected all over the world as the leading nation that it used to be.

Now it seems to say “come on over and do whatever you want, we welcome anyone and it makes no difference who you are or what you stand for” Now because of this kind of attitude, this nation that used to be looked up as a great nation has been degraded to almost nothing. As long as this president is in charge of the country, what used to be a great nation could eventually cease to exist. According to every bit of news that I can read and what this president is doing and not doing I would say this man should never have been elected. Of course it seems that if you can talk the ears off people and tell them what they want to hear and convince them everything is fine and dandy, you’re elected. Folks that’s all the liberals (another name for them is Democrats) need to get elected.
Posted by Unknown at 6:44 PM No comments:

Email ThisBlogThis!Share to TwitterShare to FacebookShare to Pinterest
Labels: McCain

Is the USA turning into a police state, or a communist or third world nation?

When I opened up Newsmax, the other day, there was a message below a picture that said "Stop giving battlefield equipment to police.” Unfortunately I haven't been able to re-locate the picture to share with you, but my point is about the caption anyway.  To my way of thinking, I don’t see any reason why the police should have been given certain types of battlefield equipment. It's like they are a military unit and not police.  This type of action makes me think that either the government thinks that citizens are ready rise up against the government or they are needed to help fight an invasion, or martial law is about to be declared for a government takeover of everything.

It was not too long ago that U.S. the government wanted to disarm all the citizens of their weapons,and some still think that's a good idea.  Many in fact think that way. But it would be a foolish thing to allow the government to do.  Especially since now the are supplying police with this type of equipment.  This all looks kind of fishy to me.

With all the lies being told to citizens, with no transparency in the government, and with all the scandals and all the cover ups, further arming police and disarming citizens is a bad combination. There are a lot of things that I could say, but the only evidence I have is what I read in the news and what my suspicious mind conjures up. The news these days is only half believable. The other half you have to wait and see. Most of the time now, news is written as entertainment instead of being factual. What I mean by that is some reporters embellish too much on what they report for their own personal reasons.  And that does not help at a time when the U.S. seems to be turning into a police state.
Posted by Unknown at 10:30 AM No comments:

In case you think I'm obsessed with American politics, I sort of am.  But it's not an all-consuming passion.  My other blog is about life after death, ghosts, unexplained phenomenon etc.    Lately I've been writing more on those topics on that blog than I have been writing here.

You can check it out here.
Posted by Unknown at 6:26 PM No comments: 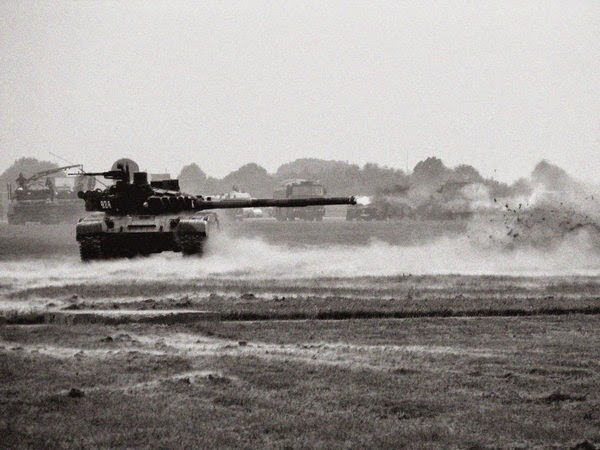 I could be wrong in what I’m going to predict, and you might think I'm a crackpot for thinking this way, but hear me out. I hope I am wrong about this. I believe that Obama has had so many complaints against him that he has to do something to redeem himself. I think that the only way he will be seen to redeem himself will be by starting a war. I believe that he will strike Russia, using the Ukraine as an excuse. I also believe that he will be the one to carry out the first strike. If that doesn’t happen then the other thing he could be ready to do is to declare martial law for some reason or other. I think the Chinese are just waiting for something of the kind to happen so they can come in and take over.

If by chance the Jihadists Muslims who are always on the war path, think that they will take over then that would be the end of the world as I see it. If by chance there is a war going on with Russia verses the USA then it will become a third World War and the Jihadists will be sure to get involved too. It will be the end of this God forsaken world with Russia, America, China and militant Jihadists all at war.

I hope I’m wrong but with everything that is going on that’s the only way I can see how a third world war will be started. All the damage that Obama has done by weakening the military and the way the Veterans are being treated will result in weak cooperation from the US military in the conflict, in which case the USA is doomed.

Like I said I hope with all my heart that I am wrong but so far that’s all I can see. If my prediction happens to come true then may God help us all because there will be a lot of death and suffering. The people that think that Jesus is dead, than they will have a surprise when they face him on judgment day, but by then it will be too late for redemption.
Posted by Unknown at 5:05 AM No comments:

Now I’m not smoking any more. But I know all the smoking from the past has caught up to me. Now I have what they call Melanoma, which is sort of a skin cancer. The first piece of evidence is on my hand and the second is between my shoulder and neck. Also, now I have a lump starting on my throat.

I will say if you are a smoker you`d better quit before it gets to the point that you start getting sick because of it. That garbage sneaks up on you and before you realize it your heart starts getting weak and you drown in your own fluids.  Your lungs being full of fluids as your heart loses power and then your kidneys shutting down is a terrible thing. That is why I called this committing suicide and no one that smokes gets away from what this smoking does to your health.

If you are a smoker, you are automatically committing suicide. I am positive in saying this because of my own experience. I started smoking at age thirteen. As I got more used to it, my smoking increased to two and sometimes three packs a day. Well, this lasted for 66 years. Then on May the 11th 2011, I took a heart attack and was taken to the hospital. At the hospital while waiting for a doctor, I passed out out of a shortness of oxygen. I could not breath anymore because my heart was not strong enough to push the liquid out of my lungs. So I drowned in my own fluids. Then my kidneys had also shut down. When the doctor arrived to check me he told my family that I would not last until the morning after having giving me a good examination. Finally, they called a priest and I was given the last Rites of the Church. My soul did leave my body and went in the afterlife. That’s how I know there is life after death. After a while I came back to life and the doctor could not figure out why I did.

When I went in the hospital I was 216 pounds. After just 10 days I was down to 168. When I came out I had to get my eyes operated on and yet I kept on smoking for a couple more years. In December of last year, a friend of my son gave my son and I, each a kit of e-cigarettes. I stared using it the same day. I have not smoked a cigarette since then. My intake of oxygen became easier. I could feel my lungs expand whenever I would take a deep breath and a lot of garbage would come up from my lungs.

Finally after not smoking for 8 months, I was getting short of breath again. I don’t know why because there is no garbage in the e-cigarette liquid, almost no nicotine. And the nicotine that is in there is clean with no extra chemicals added to it. For the last 4 months I have not been getting any nicotine whatsoever because I switched to the non-nicotine strength.

Maybe it`s a delayed effect from when I did smoke. Smoking is suicide. It WILL kill you. Just because it doesn`t do it in one day doesn`t mean it isn`t working on it and won`t get you eventually. And because you know that it will, you are killing yourself by doing it. That`s suicide.

More to come in my next post.
Posted by Unknown at 5:34 PM No comments:

Sometimes a personal account is just a ghost story. Emphasis on story.  I think that may the case here.
Posted by Unknown at 11:46 AM No comments: