The Iranians are smarter than the West 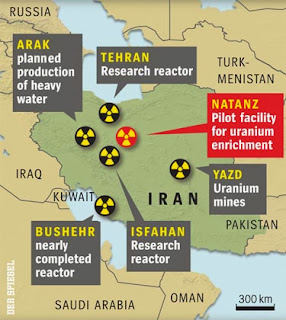 I’m beginning to think, the Iranians are smarter than the politicians in the Western world. After decades of stalling for time to enable them to continue their nuclear agenda, they finally did it again. Now they have six more months to keep on going. I guess it would take those six months to finish off their agenda where it could be done in the least likely place (that no one would know about, except the ones involved in the building of a nuclear bomb). To top it all off not only did they get more time but also some sort of relief from the sanctions that was imposed on them.  That's expert diplomacy, not like the dumb diplomacy practiced by the White House these days.

Of course the western world fell for their con hook, line and sinker. The Iranians must be laughing their heads off and shaking hands and saying we sure know how to con these guys. All I have to say about this is that they are lucky that the USA doesn’t have Mr. Bush as president anymore because their con wouldn’t work on him.

They are also lucky that the supposed-to-be-leader of the USA is all talk and no action. It has been proven in the past that the Iranians are sneaky and they are great at finding ways to put off any action that could have been taken against them. With the "leader" that the USA has now, they know they can get away with their lies and fake friendship because the supposed-to-be-leader is all for diplomacy without any action when diplomacy fails.

Yes I am a Canadian.  But I am also a human being just like all the people in the world.  If a Nuclear war was started that would affect us Canadians just has much as anyone in America or anyone else. Nations all depend on their leaders to protect them from attack from other nations.  But no one can depend on a leader that despite leading a great nation is all talk and no action. I will also say that that time of leader is not needed in this dangerous world because all talk and no action means the enemy can take his time and attack whenever he is ready.

When Iran says that 'this nation should not exist' because of they are a Jewish nation - that says it all. I've never read anything about the new leader of Iran having made that kind of statement. But it could be in the back of his mind and he's simply not stating it because of all the revulsion against that from Ahmadinejad when he was in the position as leader.

Let me tell you Americans again, that you do not have a leader that will defend your nation. Either because of a lack of knowledge or a lack of experience, he's just not doing it.  And from all that I have read since your leader has been elected, to me it sure looks like he couldn't care any less about the nation.

That's my rant of the day today.
Posted by Unknown at 8:24 AM

Email ThisBlogThis!Share to TwitterShare to FacebookShare to Pinterest
Labels: Diplomacy, Iran, leaderless, supposed to be leader