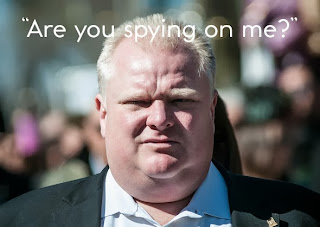 I’ve been reading about Toronto's Mayor Rob Ford in the news. Now what I would like to know is why was this man watched? Why was his privacy invaded? By taking videos of him in his back yard and then apparently another video taken when he was in someone's living room, isn't his privacy being invaded?  Here is a site with the story if you want to read more about his rampage in a living room about him babbling about committing murder but with no mention of the intended victim’s name.

Now why was this man followed anyway? Was it because someone else would have liked to get him kicked out just so that person could try and get in as mayor? Or was it a grudge that the person who took the video had or someone hired by someone else to use the law to settle a grudge? I look at it this way, if the man could do his job and his crack smoking did not interfere with his work why should it matter what he does once his day is over?

That’s what is wrong in this world today. Too many people poke their nose into someone else's business either because of what a person has that they don’t have (and would like to have and don’t have the brains to go out and try and get instead of hurting someone else and in this case getting a mayor thrown out of office).

The person that took the video of the mayor should be charged with invading the privacy of this mayor. That’s all I have to say in regards to rotten people that I just mentioned.

That’s my rant of the day. Have a good day and hoping your privacy is not invaded by some jealous person that would like to have what you have but doesn’t have the brains to do it without ruining someone's reputation.
Posted by Unknown at 10:22 AM