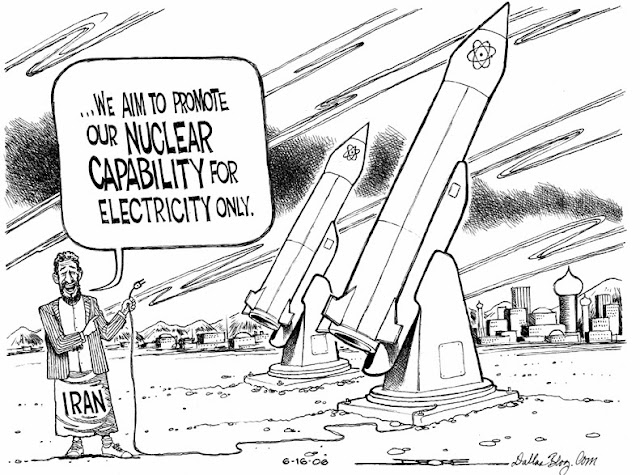 The Iranian officials seem to be the best connivers in the world. These people will do and say anything and everything necessary to complete their nuclear agenda. Every meeting that there has been with the Iranian officials in regards to their intentions about their nuclear agenda, has been unsuccessful.  Whenever the mention of them stopping their agenda of obtaining nuclear weapons they give their reasons for wanting nuclear power.  They claim it is solely for electricity. Of course they do have the highway of diplomacy open for them.
I would say if it's electricity that they want, why all the secrecy about what they are doing? The inspectors can’t go into this or that place and even at meetings they will not agree on anything that refers to them stopping enrichment or cutting down on their enrichment processes.

With all the meetings that have been going on yet no results, this to me means that while they are using the highway of diplomacy, they are continuing to work on their agenda. In the meantime from what I read those sanctions are starting to hurt their citizens and according to the reports, everything that is needed to survive has gone up in prices.

This also means to me that they are looking to build their nuclear weapons. It seems that the only way to stop them would be to bomb everything. Take out everything that they can use to finish their agenda. They are a nation of terrorists; they have proved that they are exactly what they are, because they do not hesitate to supply weapons to any terrorist groups that need them.

As long as these people are not stopped, those countries are not safe and it could spread to the rest of the world. We all know in this world today, there is a lot of tension amongst some countries and it’s shown by different countries boosting their militaries with better weapons because all of a sudden it seems that most countries are doing it in earnest.  China is a prime example of this.

I think that if the Iranians were to be stopped it would lessen the chance of an unwanted war. Just by their action they think they are already a super power. What would they be like if they had nukes? They would try and conquer the world. According to reports those people don’t have too many friends around them because of their agenda.  Saudi Arabia is even apparently working with Israel to counter the Iranian problem.

Iran, with nuclear weapons would be such a danger to the world - there would be bombing and the future dangers of fallout and radiation.