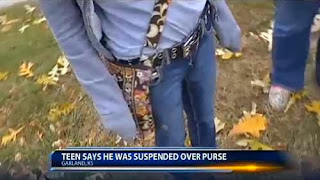 I've written quite a few posts about what goes on inside the schools in America. I've reported about students being suspended for wearing some clothes that the teacher didn’t agree with.  I've written about some teachers locking up a student in a small room.  I've written about the color of a student’s hair, on and on.  Some schools have even gone the anti-Christian path and I have written a lot as to what goes on in these schools.  But I keep finding problems in American schools to write about. I found one more.


Another suspension, this one reported by Fox News, that shows how schools go too far, and are driven by their own agendas.

The mother of a Kansas teen who says he was suspended over refusing to take off his purse says her son was discriminated against because girls at the school are allowed to wear them, KCTV.com reports.

"I don't think everyone should be treated differently," Skylar Davis, the teen at Anderson County Senior-Junior School, told the station. "Everyone should have the same privileges."

I would classify this as discrimination based on his gender. If the girls are allowed to have a purse hanging from the shoulder, why can’t this boy do the same if its what he wants? To not allow it is discrimination.  It’s also been reported that his suspension would be over as soon as he stops wearing the purse.

The questions I would like to ask of these teachers (or in some cases the principals) would be this: "Why are kids sent to school?" I always thought that kids were sent to schools to read and get instruction in math history science and to learn how to be social and how to develop their thinking skills and to learn how to think for themselves.  If schools are doing other things, we all should be asking ourselves why.