Is there a con man in the oval office? 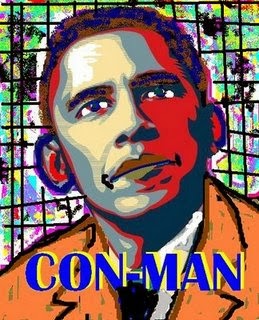 If you read my blog, you'll already suspect that to me this is a stupid question to ask. I have written about how he conned the citizens of the USA to get elected. I've written about the problems with what he has and hasn’t done since he has been elected.

Here is an excerpt from an article "site" that I noticed when I started reading Fox News last night.  I urge you to go read the whole article.

The media headlines should be about the massive IRS scandal ordered by the Obama administration and aimed at Tea Parties, Obama critics, and GOP donors. Because it’s no longer in the headlines…because of Syria hogging the media spotlight…no one is mentioning that the IRS attacks on conservative leaders and groups changed the outcome of the 2012 presidential election.

In other words,I believe that Obama used the IRS to fix the election.

Without IRS attacks, intimidation, and interference, Tea Party groups would have had the same influence as 2010 -- when their raging energy and passionate “fire and brimstone” led directly to the biggest Republican Congressional landslide in modern history.

Does anyone doubt that?

Heck we now have emails from IRS officials stating exactly that -- that Tea Parties had to be stopped if Democrats wanted to win the election.

This only reinforces my point that the man conned people to get elected. The scandal with the IRS was his doing according to the report. Now we know why Lois Lerner didn’t want to talk to the Congressional panel. When I read that she had refused to answer questions I did state that she knew something but didn’t want to say what. Now we know why she was not fired. Obama knew that if she said something he would be finished. I’ve been saying all along that this man was dangerous for the nation and I’ve been proven right.  I will also state that I wouldn’t be surprised if he was an imposter. I've mentioned before that he has acted like one.

I also said that the news is the only past time I have.  And since I am not an American and I don’t belong to any group that has anything to do with politics, I have plenty of time to read and listen to the news and then sit back and digest what I have read. After reading so much about this supposed-to-be leader, for a while I thought that my thinking of what was reported about him could be wrong. No, the more I read about him the more I’m convinced that he wanted to get elected to destroy the country and he has a good start at it.

I don’t know why this man has not been impeached. By the end of his term there will be a USA in name only and the future generation won’t have a nation to be proud about. It will be a nation that was known to be a lion but they had a man elected as a president and that man was only interested in taking the country down to be as gentle as a lamb. He's refused to go after the Benghazi killers of American citizens.  He's been using diplomacy as a cover up and with the help of his cohorts that didn’t want to lose their job so they figured their job was worth more than the nation so most of them became yes men.

Is there a con man in the oval office?  I don't understand why there are people who still don't see it.
Posted by Unknown at 8:51 AM