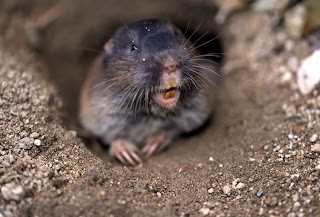 I noticed an article this morning while reading NewsMax about the military conducting a test to intercept an incoming missile. The fired missile failed to intercept the incoming one. They think it’s the battery that’s causing the problem. But because of the cuts that have been made to the military there isn't enough money in the budget for them to work on the problem.

But they can somehow find enough money to buy land for a couple million dollars to save a species of the Mazama pocket gopher. I kid you not.  A species that is in no danger of extinction is being 'saved'. Because of this, some have been furloughed and some had to take a pay cut according to Fox News.

I guess it was more important to save these groundhogs than to protect the security of the nation. I would ask wouldn't the couple million dollars have been better spent on the military instead of on these groundhogs? As it is, if a missile is fired at the USA and it can’t be stopped those groundhogs will be gone same as the people.

Reading all these reports on the stupid ideas that come out of the Obama administration, an administration that seems to be without any honor (full of lies and cover-ups) and illogical thinking, it seems like the only conclusion I can make is that Obama should resign. I would say the sooner an election is held to vote these people out and a good leader is found the better.  That is, if there is a good one to be found. He or she will have a lot of work to do to straighten the wrong that was done by this Obama administration.

Apparently Mr. Obama is a good family man. He might be, but to be a leader of a nation he seems not to have any ideas as to what to do except to try to create his own laws, and try to squeeze more money from the citizens because of his desire for spending as if money was growing on trees around the White House.