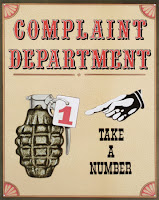 Every day you hear complaints about Obamacare. There isn’t one day that you don’t read something about that subject in the news. It seems that everybody is complaining as to the damage it’s going to do. Like I said you hear about it every day but it looks like no one has the guts to do anything about it except, complain and complain.

I just can’t understand if this Obamacare is going to cause so much damage, why not have it repealed? To me that is another thing that’s going to put the USA in more trouble than it is now. Loss of jobs due to businesses closing. Doctors either retiring or move out mean a loss of business. So don't complain about it - do something to change it.

While I am at it, I have some complaints of my own. I'm not saying complaints are a bad thing.  What I am saying is that when you can do more than just complain, you should.

Since this supposed-to-be-leader has been elected, allies of the USA mistrust the Obama administration and more enemies have been added since then. More transparency like it was stated during election time didn't just not happen, it got worse.  The only transparency showing now are through scandals and yet there are lies to cover them up. Also anti-Christianity is more rampant than what it was even in the military. Is the military being transformed into anti-Christians so they can go after the Christians when the time is ripe to do so?

I really don’t like to think this way but according to the news that I’ve been reading it sure looks that way.

Egypt is a good example of that with one exception. So far they seem to believe in democracy. Yes according to some news some citizens have been shot but it was mostly the ones that needed it (those bozos from the Muslim Brotherhood).

Come on citizens of the USA, stand up for your belief and don’t let these bozos deter you from your faith in Christianity. The USA always had the logo of "In God We Trust". Why would you want to change it to "In God we don’t believe"? Do you believe we were created by God or just born under some rock and we crawled out from under it just like a worm? Or we were born out of a cocoon just like a butter fly?
Posted by Unknown at 7:28 AM