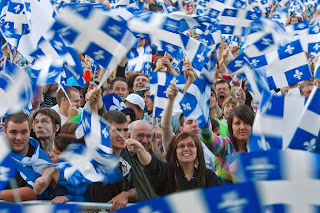 The language situation in Quebec is very possibly going to be the cause of a revolution. I hope it never happens, but by electing someone like PQ leader Pauline Marois, as the premiere of Quebec is doubling the chances of it happening. We in Quebec were screwed for 4 years with a Liberal government and now we will be screwed even worse if she is elected as Premier of Quebec.

I understand that Quebec is a French province and people like her are scared that the French language will disappear. If she is elected as Premier, whatever businesses that profit the province in the form of business taxes and jobs, will move out. Extremism in any form is not attractive to business. Difficult rules, language rules in this case, are not attractive to business either. Businesses will leave. In the end, there will be nothing here but small businesses that won’t be any great help to the growth of the province.

Its that Bill C101 that an old fuddy duddy came out with that started all this thing about the French language. Mrs. Marois is multiplying the problems by exaggerating about her issues. If she’s elected, and according to some polls it looks like she will be, the business better get ready for the exit doors to Ottawa or elsewhere. There will not be too much left for them here. Or for anyone else for that matter. I’m sure that a transition to just French could be made in a better way than what she plans. 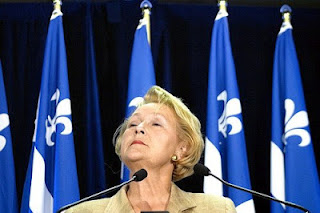 This very well may be the cause of the breaking up of Canada. The results will be as I have said before that Canada will become a banana republic. Or else Canada will disappear completely because we will all become Americans (minus Quebec). Then Quebec will be a nation of its own and will be known as a third world country and the rest of Canada if not American, will also become a banana republic. Canada has a great economy and relatively high standard of living, but that is as a single nation. As two smaller nations, that will not continue for either nation. If this happens, I pity future generations of Canadians (or whatever they will be by then). I know some might say on reading what I just wrote this guy must be out of his mind to write some thing of the sort.

Well I’ve state my opinions and if you have a different opinion then lets hear it as the comments section is always open.

That’s my rant of the day and something to think about.
Posted by Unknown at 10:57 AM