Continued from here and here. 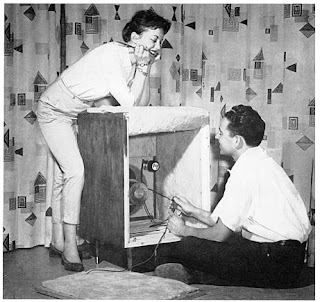 Moving into the city was a shock for me.  It was completely different, from what I was told it would be in the city. We arrived late at night and we were tired so we didn't see anything, when we arrived in Ottawa.  We were living there before moving to the country, but I had grown up in the country. When we left Ottawa I was too young to remember what it was like.

I mentioned on one of my previous post, that as long as I can remember, I always paid attention to other peoples' actions and the way they conducted themselves. I’m still doing it and as a result, I've noticed that in the city people were still friendly but more or less distant.  They always seem to be occupied with their own thoughts. As time went on, people seemed to become less friendly towards each other and became more suspicious of each other -- to the point were it has become a dog eat dog society.

The reason for this was, I think, that more new things were being invented, the cost of every thing was going up. Because of that people started to fall in love with their money - so much that it created problems all around the world to the extent of causing wars and enemies with people that used to be friends with each other.

I remember going to a movie as a kid it would cost 25 cent and that would include popcorn and coke. A little pack of 6 cigarettes (for the ones that smoked that is) cost 25 cent. A coke in a small case 6 went for 36 cents.  Street cars in Ottawa - 5 cent and with a transfer you went across the city and now you don’t get on a bus for less then $3.00.  To go to a theater at least $7 to $12.  Everything has gone up so much and trouble around the world is I think all caused by frustration and love for money.  Each one is looking to make a name for themselves.  Some even by deceiving their best friend just for promotion and more money and power.

These days, if you shake hands with some one and if you have a ring on your finger that’s expensive, you practically need to check your finger after your hand shake because that ring could be gone.

We live in a world that is so persuasive that  you have to be up to date on things. If you are not then watch out -  you're in for a surprise and your liable to lose what you have accumulated. Nothing is safe any more.