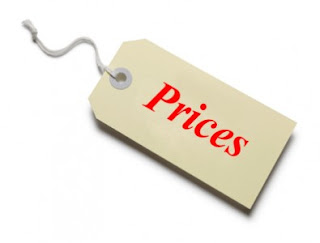 I get a kick out of some of  businesses.  Some will overprice their product and once they see that their sales are falling, then they put on a big sale at a reduce price. The price that they reduce it to is the price that they should have sold it for in the first place. They still make a profit.  Then some businesses say that they pay the taxes and that is another lie. The prices were already boosted to include the taxes. I say this because any business person will not sell anything without making a profit or else they would not be in business too long.

I guess they take people for suckers and a lot of people clearly are.

Here is another example. My ex-mother in-law picked me up once because she wanted to go and buy a new car so I went with her. When we arrived at the dealer, she knew already exactly what car she wanted. We went in and she spoke to a salesman saying that she wanted this certain car asked the price and he said well it's x dollars. but while she was looking at the invoice she noticed a charge of 700.00 for transport. She then asked him what they meant by transport. And his reply was “Well to bring the car here.”

“Then she said I’m not paying that but I am paying cash for the car” He went in to talk to the manager then came back and said “ok”.

.While he was talking to the manager, I went out side and more or less checked out the prices of the used cars. A couple of days later, I walked by and noticed that some of the cars that I could remember the prices for had been changed. I decided to go on the lot and checked the other cars and pretending that I was interested in buying one.

When the salesman came out and asked which one I was interested in I told him that I was only looking. But after looking at those used cars I’ll tell you, on that batch that they had on the lot from what I could remember, they only had to recover I would say about another $400.00. I imagine they would recuperate that on their next batch of used cars. Needless to say that dealer doesn't exist anymore. I’m not implying that all businesses people act like this but I’m sure there are some of them doing it still.