The morning talk show on the CFRA radio station 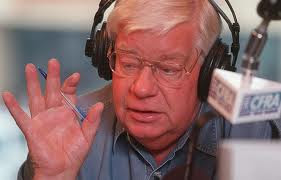 I was listening to the Lowell Green talk show this morning and one of the topics came up about the Liberal party and he was asking the people if they thought if the Liberal party would come back as power full as they were.

The Liberals might come back after a couple of years after this generation has left this world, but at this time we remember the scandals and the money still owed to the people from the adscam scandal that they should have paid back. Its been proven that they do owe it. We also remember when they emptied the U.I. fund to bring down the debt and brag about they had left the party that was elected after the election with a low debt or debt free I forget which.
We also remember what the EX. Prime Minister Mr. Trudeau who has departed since then, brought in the stupid senseless metric system instead of raising taxes without lowering the prices on the existing products, knowing very well that the Government and the businesses would bring in just as much if not more than raising taxes. He was saying that the people would get more for their money. Did he think the businesses would pass on the extras to the consumer? What a crock. What we were paying for a gallon of gas stayed at the same price and we are getting one eighth less then the Imperial gallon same as one quart. One eighth less!
Ex; I used to paint cars and with a full size car we used to use three quarts of paint and now we have to use four to 5 liters to do the job, but at the time the prices never changed and now it costs a lot more because of prices going up. Another example, when the big talk was on about Global warming, the first thing we heard from them was that we would have to pay carbon tax. That’s another way to dip into the citizen’s wallet.
Then for the Election past they bring in this guy which was baptize here as Count Iggy, who according to the reports, had spent more time out of Canada then in and laughed at the Canadian flag, and also called the USA his country, and yet the Liberals brought him in as their leader. In one of his interviews, he clearly stated that he would not vote against a hike in the GST. Another tax grabber for the Liberals.
Do these Liberals think that we are that stupid? Well in the last election they found out that if we were sleeping we woke up to the fact that these guy’s belong to another Planet.. Surely not on this one and I hope they go back and never come back because they have robbed us and lied to us. I feel that our taxes are being paid to people that is useless to us and should be out looking for another way to earn a living. I also believe that these politicians should not be subsidized. Their wages are high enough to pay for their own and if they can’t save to run for election then tough. Why should we, the tax payers, pay for someone that we do not want?
This is my rant for the day, and believe me, I enjoyed it.
Have a great day.
Posted by Unknown at 2:50 PM