I was listening to the news on the CNN the other day, and there was a report that the government troops were supplied with Viagra pills to rape woman. If that report is true, this man is not only a killer of his own people, but also a pervert. He should be taken out and get the same treatment as Saddam Hussein did. Gadhafi is an evil human being that does not deserve to live. So far if it’s true according to what has been reported, he is not only a thief, but a murderer and a pervert, and a liar and a terrorist. 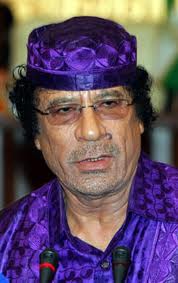 If this man is allowed to get away with all the things that he has done, he will become another Bin Laden. Of course diplomacy has to enter the picture first, before anything is done. Diplomacy is good it can save a lot of problems but by listening to the news and what goes on, I find that sometimes action should be taken to a certain extent and then try diplomacy. Ex; How many Libyans got killed by Gadhafi’s murderers? By the same people that’s suppose to protect them by trying diplomacy first.
To me, I would think that there is only one man that has the guts to send someone in to take that Gadhafi out, and that is the American President. I do not think that he would have to be asked too many times. I know its been reported that the Libyans do not want American boots on their soil but I think if its done quick and quiet and out right away I think they would be glad.
That is my Rant for today.

Anyone wants to comment on this I would be happy to hear it. Just keep it clean or it will not be posted.
Posted by Unknown at 7:03 AM