The Exploitation of Women Part 2 of 2 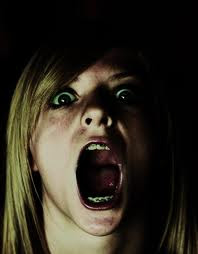 I think the worst exploitation on a woman’s intelligence, weakness and brainlessness is in the horror movies. This is not the fault of the woman, but of the play and script that they have to go by. This is what I meant by the first statement. This is at night; the woman is in the house and listening to the news, when the news announcer says that the police are looking for a killer that has already murdered someone and that he might still be in the neighborhood. All of a sudden, she hears a noise and it’s in her house, then she spots a man, then she starts screaming and runs out unto the street and does not see anyone. She stops screaming, and then she starts running and starts screaming again. Too stupid to realize that there is no one chasing her.
Another movie: The woman comes into her house and she doesn’t know that there is a killer inside with her. All of a sudden he makes a move towards her. She lives in a big house. She runs out of her door, down the stairway, down to the basement were there are overhanging pipes all over and all the rooms have adjoining doors. So, she runs to one room opens the door and runs to the other door and out of that one and back amongst the pipes to the other one and out of that one then she spots him. This woman ducks behind a door, and she’s standing there, you could here her breath and making little noises. In the meantime, the killer is getting closer and closer until the killer walks by. She lets out a scream that makes me jump! I think if that would have been a real killer, he would have taken a heart attack for the screech that she let out. The woman sees an exit door; she goes for it, then, out in the bush. I forgot to mention this house was in the bush in the middle of nowhere. Anyways, she’s running through the bush and then she falls; now she did not hurt herself, but she could not get up. She was whining.
This is what I mean; the writers would make you think that these women are weak and brainless. What I get a kick out of is some of these women in these pictures are running and trying not to make noise but they are running with high heels on. Another thing that gets to me: I’m watching a good movie and this is in a bush or field, this guy or woman is being chase by someone and being shot at-at the same time. When all of a sudden, here comes a vehicle with a person inside that’s being driven by the girl or man that’s being chased whoever it is that’s being pursued, it’s the lover of the one being chased but they have time for a big hug and a kiss.
I could keep on going, but this just shows how the women are being exploited by the script writers. I know these are only movies but do women have to act so stupid and brainless. Mind you, I’m not blaming the women for this, but the writers. Same as the men trying to sneak up on someone and you can hear them going up the stairs or walking in a hallway thump thump..
Posted by Unknown at 1:56 PM

Email ThisBlogThis!Share to TwitterShare to FacebookShare to Pinterest
Labels: exploitation, women being exploited