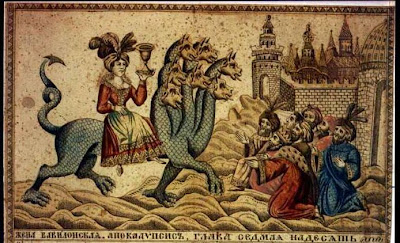 America is not referred to in the Bible as America but as Babylon and that’s why the title of this post is what it is. I read the scripture of Revelation and the way Babylon is described it can’t be any other nation than America. Then I read part of Isaiah and it more or less gives an identity as the revelations in referring to America.

With everything that is happening in the USA - people giving up on their faith, refusing to acknowledge that there is a God, and some can’t even stomach being in a place or walking by a place where there is something that represents any kind of religious belief. Even in some schools students are prevented from mentioning anything about religious belief because it might offend some one. Even homosexuality is accepted.

In the scriptures it refers to 2 people but they don’t mention who they are they are referred one to the South and one from the North. From what I’ve been reading of everything that has been going on, I will put a name to these self-appointed kings. To the South - Obama and to the North - Putin. Both of them will be responsible for the second coming of our Lord Jesus Christ and when that happens that will be the end of this world . Just read the scriptures and you will see why I’m saying this and why America is called Babylon. I could write more on that but I won’t. I will simply say that the 10 commandments do not seem to exist to most people in the USA. This kind of non-belief has been going on from what I’ve been seeing, since 2011. Of course there was some before but not nearly as much as there is now.

May God bless everyone and have a good day.
Posted by Unknown at 4:07 PM