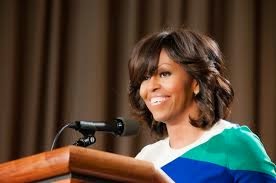 Today my rant is about blabber mouths that condemn others without knowing the true facts. I’m talking about people that try to discredit Mrs. Obama. I would ask is it because she is black or out of jealousy? Or is it because she is Obama’s wife? The only thing I have against Mrs. Obama is poking her nose in where it doesn’t belong and that is trying to tell the parents how to feed their school kids for lunch. From what I have seen. lunches that the schools have for kids is garbage considering how energetic kids are at schools, and what they need. That garbage that I see as to what the kid’s lunches are at school would not give the kids the energy needed for more than a couple of hours of activity. So I understand her concern, but she's not an elected official. And unlike some Hollywood actor or private citizen, she has access to influence, which she should not use, because she was not elected.

But I have not seen anywhere else where she has poked her nose in politics. So why call her names or try to say that she’s not what she pretends to be (a lady but is really a man - yes, people have said this). Then there is reference the size of her butt. I don’t care about the size of her butt or how she looks like as long as she doesn’t poke her nose into politics as it was her husband that was elected and not her. You don’t agree what her husband does that's fair. But why include her and truly distasteful make remarks that I have seen on a lot of comments on various websites? I guess they ran out of names to call Obama so they started to pick on her and the kids

When I see a story an there is a lot of comments at the end then I read all of those and sure enough most of the times she’s mentioned in a comment and not in a nice way. Once even her kids were picked on because they were at a meeting just for adults and it was reported that the kids looked bored. Some made a big deal  out of that. What is the matter with some people? Don’t they know that if it’s only adults, kids will be bored. Was this just because they were the Obama's kids? Some people should go back in there mommies' basements and stay there.
Posted by Unknown at 6:46 AM

Email ThisBlogThis!Share to TwitterShare to FacebookShare to Pinterest
Labels: comments, without knowing