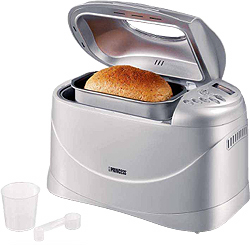 A few posts ago I was complaining about appliances that looked good but weren't dependable. Still true. But I mentioned I would talk about bread makers and their recipe books next. So I am posting about it now. And I'm a post or two late, it wasn't next. Sue me.

The bread machine I have has lasted me for a long time. I forget the brand off hand but the model is B2300. It is a good bread maker but you really have to experiment with the first bread that you make when you use it. Well, the first bread, the second and the third bread too.

I’m talking about a simple white, sandwich bread. Unless you like a real heavy bread that is like a brick in the stomach don't follow the directions. If you like that feeling of a rock in your stomach, then by all means use the existing recipe. Following that recipe, I now use only 4 and a half cups instead of the recommended 5 and I get a decent bread. It's lighter. For making that bread, I do not make any changes to the other ingredients.

These bread machines on the whole are not too bad it’s the recipes that get me. I wasted a lot of ingredients by experimenting. It was worth it in the end. That is until the ingredient prices started to climb. Now I'm not so sure it's worth the cost.  In fact, I know it isn't.

Not all the bread makers are good. The first machine I had lasted me about two weeks then it just burned out. Two weeks! That's not worth it at all. I forget what the model was, but it was no good. It makes me think I got lucky with my most recent machine.  And even though it only worked for two weeks, I still had the same recipe problem. I would measure the ingredients as stated in the book but I never knew how it would turn out. I would set it for light and most of the time it would come out much darker. Is that the recipe, the bread maker or the instructions that cause the problems? I don't know. But something is wrong.

Back to the recipes

These recipes in these books, don’t believe that they are 100% right because they clearly are not. I think they try too hard to copy the home made bread from the old days when the woman on the farm would make home made bread. Trying to, duplicate that type of bread in these machines just doesn't cut it (no pun intended). I was raised on a farm and my grandmother use to make two of those nice big round loaves every day.

For the purposes of full disclosure, I've never tried to make any other kind of bread in these bread machines. The recipes for other kinds of bread might be good - I don’t know. But from what I have read in these books, they seem to be using too much flour. They should use less flour, and consumers shouldn't have to be figuring that out for themselves, or having a machine burn out in two weeks.

And they can try as much as they want they will not come out like farmers wives' beautiful home made bread like it should.

You might think that you will save money by making your own bread. I have news for you.What you pay for the ingredients needed for making bread (even if the recipes were right), you are not saving anything. Just the yeast alone costs more than a few loaves of bread. I'm talking about bread machine yeast in a jar, not the ones in small envelopes. The cheapest I could find was $6.95 + tax. The yeast even goes bad before you can use it all unless you want to bake every day until the jar is empty. If you do, you'll probably be wasting bread. If not you will lose about half of that jar. This has happened to me a few times. Then the cost of flour plus taxes, the hydro usage to make it, plus your time, plus the balance of the ingredients - it's just not worth it. You are better off to just go buy your bread from the store.

This is my sort-of rant for today.
Posted by Unknown at 6:53 AM