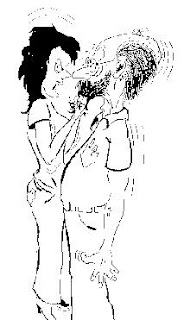 I say our Creator made a mistake when he created the human species, specifically, the female kind.
There are quite a few woman that I know that I find are real nice but at a certain time of the month they become monsters and dangerous to mankind. This time of the month is disaster time for both sexes - one runs for cover while the other throws everything that they can put their hands on, develops a vocabulary of words of their own and their imagination runs on overtime until the PMS is over. I'll let you guess which sex is which.
When the Creator created the female of the species, His mistake was not to create a program in that part of the brain to override their PMS time. That’s why I say He’s not perfect. Now religious people might be offended by that. Women might also be offended by it. Also, men who deal with partners with PMS poorly might be offended. For that matter men who deal with it well might be offended. Oh well, if it bothers you bring it on. I'll be happy to defend my thoughts on it.
Have a good day. Bob
Posted by Unknown at 7:12 AM