You have a real problem 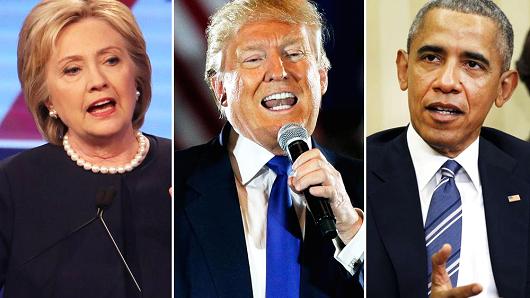 I would say that you Americans have a real problem in the coming election as to whom to vote for on as your next president.

Well maybe not. I talked about this on my other blog recently. I ran across a site that predicts that the last president ever will have been Obama. Yet there is another site that predicts that Mr. Trump will be your next president. Still another site that I’ve read indicates that Obama will cancel the election to get a third term and will declare Martial Law to do so. But there is also another site that says that God sees the USA as a second Sodom and Gomorrah and will burn it down because of all the corruption and sins that are being committed and exported out of the USA. I have recently commented on some of those sites but I couldn’t say very much because I believe most of them are just rumors or theories started by some individuals that didn’t have anything else to do. I can’t verify those opinions or thoughts with other sites. I did post a couple of sites on Facebook hoping to solicit opinions on what made the most sense but there was no reaction to them. So to me a lot of people do not believe in them (except for Obama cancelling the next election On that there seems to be a lot of chatter).

Now I entitled this post "You have a real problem". If all those sites are just rumors you still have a problem as to whom to choose as your next president.

Here is the problem I’m seeing. If all or even some of what Mrs. Clinton is accused of having done is true then she should not even be near the White House. She's a criminal if half of it is true. Also, her agenda would be a continuation of Mr. Obama. She should be jailed instead and her security clearance canceled.

On the other hand, Mr. Trump what he says the first thing he would do is clean up the corruption that exists in the White House and fire this one and that one. I guess to a lot of people that would sound like he could be a dictator but once he has cleaned up the corruption that exist he might turn out to be a good president. But if he thinks that he will be able to push around other leaders of other countries that do not agree with him he has something to learn. Those people are for the country that they would care for wholeheartedly and that’s where he will learn that he’s not in the building business when it comes to telling others what to do and what not to do.

That’s all I have to say on this subject but to say I’m happy I don’t have to make that kind of choice that you people will have to make.
Posted by Unknown at 4:08 AM