Ontario. Yours to discover. 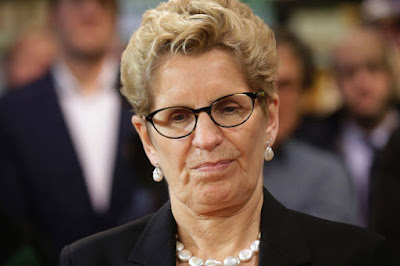 I get a kick out of this when I read the title of this post on Facebook. Ontario. Yours to discover. It should have read yours to recover after that no talent fruit cake premier Wynne has finished bankrupting it to keep her friends and herself happy.

After all, look what party she belongs to - the Liberals. Just that alone should tell you that there is no chance in this world that the province has a hope to survive with a fruit cake as premier. While I'm at it, I might as well add the country too, with the traitor that has refuted his faith to become a Muslim as the prime minister of this country.

Also on Facebook I saw the picture of that fruit cake Wynne with her arm straight up and the caption read "I trained Trudeau". What a damn idiot. She can’t even manage the business of a province, so how in hell can she train someone to manage a country? Maybe it's not so far fetched though, because he's also someone that doesn’t know what the hell he’s doing and has shown he is okay with breaking almost all promises that he had made during the election (and within 6 months of being elected).

I guess the Liberals were too busy trying to destroy whatever the Conservatives put into effect or were discussing doing.

If you people from the Liberal party think you will be able to bring the party up to what it was in the past, you'd better think again. I will say by the next election if you people are still in power you might stand a chance of being re-elected but I truly doubt it. I am quite sure that what that fruit cake is doing with the province of Ontario, people will not forget her. That will fall back on the whole party not only provincially but also federally. It seems the last election some people just put their name down and voted for whomever the pen fell on. But I’m sure next time their eyes will be wide open and the Liberals will be out in the cold again.

Before I forget, McGuinty apparently was asked to join the feds but refused, so Trudeau who had volunteered before but was refused in lieu of McGuinty, took on Mr. Trudeau. This just goes to show that you Liberals don’t give a damn about the people just as long as you get elected because you all knew what a disaster McGuinty was. Now your second fiddle Trudeau will bankrupt the country because he doesn’t know what he is doing and I don’t think that anyone of you people do either. That fruit cake as premier of Ontario has opened peoples’ eyes.
Posted by Unknown at 4:27 AM