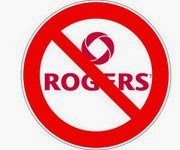 I have had issues with Rogers regarding my wireless phone for years. Some of my best ranting over the years has been made verbally with family and friends. I wish someone had recorded those rants because you would have some really interesting things to read if I wrote them here. Unfortunately, there are too many details to remember to do those rants justice here, often years after the original rants. Nevertheless, I have some new stuff to work with and I don't feel like sparing Rogers today. So here goes.

I would swear that at Rogers, the customer service people have received some training. They must have gotten it when they started working there. But I would suggest that they give them a test before they cut them lose on the public. I find from my experience in dealing with some of the customer service staff at Rogers, that some problems they have with customers comes from them not listening to what the customer wants. How easy would that be to fix? Train them TO LISTEN.

After identifying myself, I gave her my new phone number, she checked my account and I told her what I was supposed to have on my account and how much I was paying a month (all to identify myself for security purposes). I was surprised when she told me there was a surcharges that was on there and whoever had taken the original request had me down for long distance, call forwarding, answering service and caller ID. I never wanted or asked for any of those things. Not once did I actually ask for them!

This is not the first time. I’ve had things done to me by Rogers that were worse than that, even ending up in a collection agency because of some ignorant person that could not take down the proper information given to him.

I would advise anyone calling Rogers for anything, make sure you have a recorder with you for your own protection. From my experience over the years I’ve been with them, I try my best not to call them for anything that is not urgent. That's how I protect myself from them screwing something up again (or fixing a problem by making it worse). Maybe some of them were sleeping while they were supposedly being trained. Either that, or they are being trained to give the customer more than they asked for and then charge them for it. I suspect that just because of the way they take the information given to them but put down in their systems what they want to sell or else what they think the customer wants.

I should mention that the last person I talked to, she did help me out. But that seems a lot more like an exception than the norm at Rogers.