I notice an article while reading Fox News this morning.

“U.N. food agency is pushing a new kind of diet for a hungry world. It ranks high in nutritional value and gets good grades for protecting the environment: edible insects.” 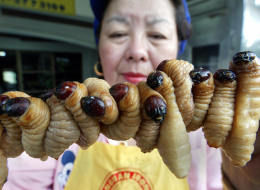 I know most people would say (yuk) “I wouldn’t eat insects”.

I guess it wouldn’t be any worse then what we’re eating now with what is taken out of the food and what’s added to almost all the food we eat.  But then they would do the same for insects then you would hear or read what different insects are really good for different parts of one’s body like the heart, kidneys, lungs, the brain, etc.

I can just imagine all these health fanatics advising people on what bugs are best and most tasty mixed with this or that and some gourmet chefs coming on the television showing recipes that they have developed for different bugs but with a mix of something else.

Then you I can predict that the government would step in and says that we have to take this and that out of certain bugs or insects because it has too much vitamins or other minerals in certain types of insects. And then they will be all over the fact that the bugs have too much mono sodium glutamate (MSG) or all kinds of sodium.

I will say that maybe bugs insects are good until it comes to being for human consumption.  Like I said, this will be taken out and that will be added to turn them into something similar to most of the garbage we eat now. What good is that?

Bonne appetit
Posted by Unknown at 8:00 AM