America has no steering

The United States is now a nation that doesn't seem to have any leadership whatsoever.  I am not a person of great knowledge about politics. But a person doesn't have to be knowledgeable about politics to understand the lack of a rudder, the lack of steering that exists in America.  No steering means no leadership. I mentioned in a previous post that you can only believe half of what is reported and the other half you just have to wait and see. 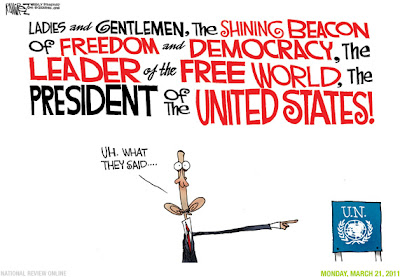 I know this happened about 8 to 9 months ago, but it’s not dead yet as to what really happened in Benghazi. We have been shown the president contradicting himself on what he said in previous interviews about the subject of Benghazi.  There is also the very serious issue of the watering down of the report from the FBI about that night and how the administration was supposed to have been warned about what was happening and someone refused to send help. Everyone knows what happened to those Americans that were there.

What about the doctor that helped to get Osama Ben Laden? He’s rotting in jail and there doesn’t seem to be any help coming from the administration to try and get him out. If there were efforts, the media would have been all over it. There is a man that put his life on line to help his country and look what happened; he's been left to rot in jail and tortured. How about the known terrorist shown on video that were in the Benghazi affair and are running loose in Libya according to reports by video, we never heard of anything being done to bring them to justice?  Where is the diplomacy to get that doctor released?

What about the IRS scandal poking their nose in private e-mails of Tea Party groups? What about a president ignoring certain parts of the Constitution to get what he wants? What about the censoring of a video to the military that was uncensored only after complaints. I’m not blaming the president for this. But he certainly has not helped in any of these cases if he's not outright guilty of something. Snd while I'm at it, why is there is so much talk against Christianity all of a sudden?

Where is the leadership for this nation, America?  Where is the transparency that was so much mentioned during the election?  Both, are gone.
Posted by Unknown at 12:27 PM