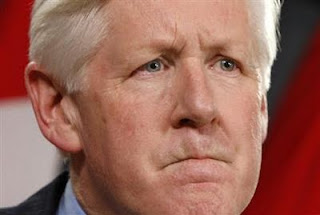 Here we go again. The Liberals showing once more that if they were in opposition, it would become a cat and dog fight and this government would not get anywhere.
Its been reported that  Bob Rae the interim leader of the Liberals is not to happy with some of the changes that Prime Minister Harper wants to make. For example, the wheat board, the gun registry and a couple of other things.  He's complaining that Harper is turning this country into a warrior country instead of a peaceful country and that is truly a laugh.
When former president Bush decided to attack Iraq the Liberals where the first ones to send Canadian soldiers to that war. He’s also complaining that Harper is going too far to the right. I will give credit to Bob Rae - he is right on a couple of things that he says Harper should not do and I agree with him.  I was thinking about how far to the right Bob Rae will go to try and rebuilt the Liberal party. I would be willing to bet that he would beat Harper if he thought that he would stand a chance to become the leader of the liberals and become Prime Minister after all he must be used to it by now jumping from one party to another.

This is my rant for today
Posted by Unknown at 4:25 PM