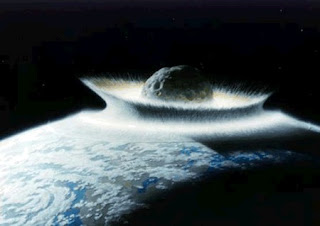 The end of the world is approaching according to predictions that have been going around lately. Or once again.  Well I don’t know about that, but if you have been reading the news and listening to reports from the people quoting the Bible, it says that before the end of the world arrives there will be storms, like we never seen before, disease that can not be cured and just recently one disease has been discovered that there is no cure for it
So far we have had all this stuff happen and we're still getting them.  There have been earthquakes - recently in Quebec here, we  a little one (4.1 magnitude).   Recently  Afghanistan and Pakistan had a 5.5 earthquake and Oklahoma had a 5.6 magnitude one.  There's also been a lot of flooding going on. I’m beginning to wonder if these guys are right in their prediction of the end of times.
I guess when it happens a lot of us will not have to pay for any more heat in the winter.  So maybe it's not so bad.

Email ThisBlogThis!Share to TwitterShare to FacebookShare to Pinterest
Labels: Bible, earthquake, end of the World