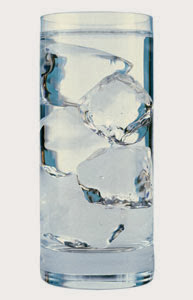 Here is why I’m saying this. Anyone can do a little experiment like I did. I took an 8 once glass and filled it up with ice cubes. Then put as much water in it as I could up to the rim, then I let the ice melt and after it had melted there was no spilling of water. The reason is because, whatever volume of space that the ice cubes took, it took the same volume of space when the ice melted.

Once they finally admitted that the planet wasn’t warming up, they decided to change it to climate change.

That’s my rant for today