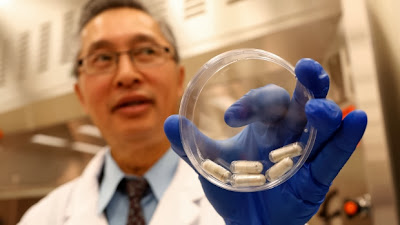 My last post was about beaver butts.  Don't get the wrong idea - I'm not fixated on derrieres.  But I just had to comment on this article that's worth checking out.

Hold your nose and don't spit out your coffee: Doctors have found a way to put healthy people's poop into pills that can cure serious gut infections - a less yucky way to do "fecal transplants." Canadian researchers tried this on 27 patients and cured them all after strong antibiotics failed to help.

It's a gross topic but a serious problem. Half a million Americans get Clostridium difficile, or C-diff, infections each year, and about 14,000 die. The germ causes nausea, cramping and diarrhea so bad it is often disabling. A very potent and pricey antibiotic can kill C-diff but also destroys good bacteria that live in the gut, leaving it more susceptible to future infections.

Recently, studies have shown that fecal transplants - giving infected people stool from a healthy donor - can restore that balance.

I read something similar before but in England the scientists tried to round up at least 100 people for their experiment but they could only get 80. With only 80 people, they tried their experiment just the same and apparently they have succeeded in what they were trying to do.

I’m sorry for these last two rants (the beaver butts and this one) because they are sickening.  But I do have a question about patient information.  If you get that treatment will they tell you what you are being given? I have my doubts. And that's the reason for this post.  I think it's important that you know the details when you are being given poop.

And coming back to foods that we buy, do we really know what it is that we are buying?  For example, wieners or hot dogs (whatever you want to call those sausage-like things), what is supposed to be in them? Is it some meat that is hashed up but if we were to see it before being hashed up would we still want it? And what about all these other luncheon meats? What about all these canned goods and foods that are in a sealed packed and supposed to be good for at least a couple of months or years?  Are they?  There's just too much that goes unanswered, or doesn't get answered with enough to convince me that our food is all safe.  And if they are trying to give us poop to clear up poop problems, even if it works, what does it tell us about what they are willing to tell us?  How much do they hide about medicine or about foods?  Can we really ever know?

The only thing you might be able to trust is if you're growing your own garden.  But then the fertilizer that you buy - what is it made from? Because most of us know that the fertilizer enriches the earth but then it also feeds the seeds that you put in the ground.

A person could keep on talking about what is done to foods, what is taken out, what is put into it, the drugs that the animals are injected with.  All of it might have something to do with the goodness of the meat.

I better stop because when I start thinking about some of the things that can be done to the food it makes me sick.

I will say those two are sickening rants. But they are derived from the news that I read.
Posted by Unknown at 10:56 AM