How an amateur can ruin a country. 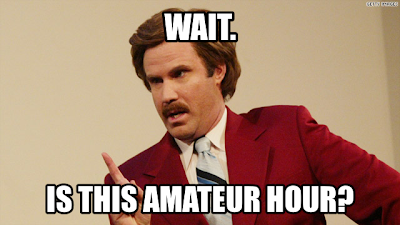 Every day, I read and listen to all sorts of news articles and videos and I always come to the same conclusion that ordinary citizens do not have anyone in the government to represent them. I know there are people in government that
try but we might as well say that there isn’t anyone because most seem to be "yes men" sucking up to the president.

America has twice elected a man to run the country, and this man is running the country alright - he's running it down the gutter. Yet all of those who have been elected to represent the people are still letting him do whatever he wants.

Take a look at Fox News to see what he’s spending America's money on. It's money that the country can’t afford but it's being spent on stupid looking hats for the Marines (no kidding) and they have to be made differently for females and males. Millions are being spent on hats that look like a stove pipes that have been squashed.

Then there's the spending of millions of dollars on a website to promote a stupid law that has proven to be a big mess, just to enrich the government. As a result of Obamacare the rich will become middle class and the poor will all become welfare recipients. That will eventually bring the country down to nothing.

I said before that an election is what is needed in the USA to elect people that know what to do and not an educated fool that doesn’t know what to do (except to ruin the reputation of the country and drive it into bankruptcy).  It all stems from a lack of knowledge of how to take care of a country like it should be taken care of instead of worrying and spending millions on some stupid hats and a law that will eventually be the end of what used to be a great country.

Believe it or not I’m not an American but to read and listen to what this guy is doing to the country and those sucky babies sucking up to him makes me sick. Some even lie for him and a good example listen to that Carney guy (he’s the press secretary for the White House). Whenever he’s asked a question that involves Obama, he will say that’s all for today then turns around and walks away.

I get all my information from the news and I realize that with what is reported you can only believe about half of what is reported, because each reporter has their own way of reporting. Sometimes the reporting of an incident or conversation written by different reporters reminds me of the Holy Bible, most anyone can make up their own mind as to what is reported or what is meant by the way some reports were written in parables just like the Holy Bible.  But if even half of what has been reported about this administration as being incompetent and amateur is true, then it is still way too much.

Another thing that is pitiful. When experts on building websites cannot build a proper website for a new law, it must be a terrible worded law. From the reports that I read, I guess there having problems in hiding what the government only want the citizens to see without giving them an idea as to how much this law will enrich the government and screw the citizens about getting all their private information and letting the citizens know how much it’s going to cost them. Then if they refuse to sign up because of what it’s going to cost them then they are fined for it. If this is not socialism I would like to know what it is.
Posted by Unknown at 9:42 AM