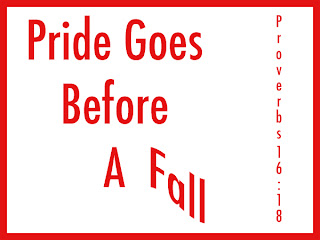 So far in my life, I have notice that some people have enough intelligence to set themselves up to have a good  life, with a good  paying job. But still, some turn out to be educated fools. What I mean by that, is that they think they are the greatest and will not take any advice from anyone.

Having too much pride and not enough knowledge of diplomacy can ruin a lot of people. Employment has been lost, marriages have ended up in divorce. If there are kids they either end up with one parent or being adopted by strangers.
A person without pride is not worth too much. But too much pride can be just as bad. I think what would help a student say starting from grade six, would be to have one lesson a day on diplomacy and have them be tested on it after each semester. Then if the student enters college, the colleges would have to integrate it in their courses as well. Then it would not matter what you want to learn in college, you would have to keep on learning about diplomacy  until you graduate. The student would come out knowing how to conduct themselves with other people.
That’s my rant of the
Bob
Posted by Unknown at 4:57 PM

Email ThisBlogThis!Share to TwitterShare to FacebookShare to Pinterest
Labels: Pride