Islam will take over the world. 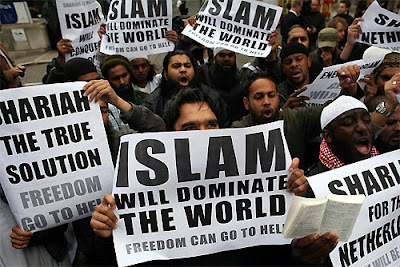 I truly believe that this world will soon be ruled by Islam, and I think it will happen soon.  With so many people questioning Christianity and turning away from the Bible, as well as Islamic countries and religious leaders doing everything they can do to push Islam and eradicate or marginalize other religions, it's happening already. Islam will take over the world much sooner than we might expect.

There was a story on Fox New last week about a college that shut down dorm room Bible study. This was a college in Florida, not Egypt. Almost every day now, you hear about something of this sort. People seem to be turning more and more against Christianity. You can say "well, that's the stupid government and not the people", but in North America we choose our government and leaders. So if people were against not allowing Christmas displays on government property, they should elect different people, or at least speak out against the actions of the government (or college leadership in this Florida case - I'm not sure if this was a government or private college) That’s why I say Islam is going to take over the world if this keeps up. Undermining our own foundations and not challenging the views of a religion that seems driven in large part by radicals is not helping us keep our way of life, it's weakening our ability to defend our way of life.

Of course that is if we don’t get blown up first by some politician wanting power and not thinking about their own survival (like Ahmedinejad in Iran).

I really believe that the second coming of Christ will be when the Islamist takes over the world. By then it will be just like the beginning was in the old Biblical days. In other words the new generation will be back in what used to be the dark ages. I say this based on what I mentioned in an older blog post about Bible history.

The problems in this world is that, there are too many religions or cults whatever you want to call them and too many scandals, caused by the supposedly  faithful.  Some of these people, especially priests will say it's God's will, but they also say God is a good God but they blame everything on Him when a disaster happens. What a bunch of hypocrites. Then they wonder why so many people are losing faith.

Say what you will, but our foundation as a society is Christian.  Our core values from the Ten Commandments to freedom of thought come mostly from Christian principles.  As we weaken those principles in this supposed quest for rationalism, we weaken ourselves.  Meanwhile, there is a cohesion and forceful, willful effort on the part of Islamic nations and communities to spread and strengthen the religion.  Weakness never beats strength, and we are in trouble.

That is my little rant of the day. Or at least the first part.  I will continue with this rant tomorrow.