More and more often, we hear about non-believers (or unbelievers as I call them) not wanting to hear about anything that would refer to God, or any objects that would hint of any kind of religious beliefs. A lot of it comes out in the United States around Christmas displays in government buildings.  These are the type of people that have no faith - except perhaps in themselves.  It's okay to have faith in yourself, but it's also okay to have faith in God if that is how you feel. 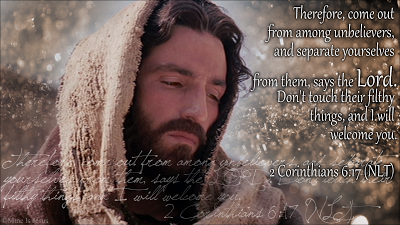 These unbelievers will not believe in what they can’t see.  They won't even bother to look around and think about where we come from. Do they think that everything we see today has always existed? Do they really think the universe just suddenly exploded into being?  It seems to me that requires a belief of a different kind, but still, a belief.  And why is that belief so superior to those who believe that God created the universe?

These unbelievers even try to change the name of the holidays like Merry Christmas and Happy New Year; instead they would like to hear "Happy Holiday". All I have to say to you unbelievers write those words on paper and when you go to the bathroom, use that paper to clean yourself.

I know you’re allowed your opinions because this is how democracy works.  But at the same time, the most people that will go along with you unbelievers on your way of thinking, are the ones that are in high positions and don’t want to lose their jobs.  I'm especially referring to politicians, because they want your vote, even though some of them may not agree with your ways of thinking. That’s what’s called hypocrisy and that word should be incorporated in a lot of people’s birth certificate as their second name.

People have had faith in the past but with all the scandals as well as the untruthful stories about the people that are supposed to spread the true word of God, faith has been lost by many and they have become unbelievers. Over time, the unbelievers have grown in numbers.

I realize some people might be offended by what I've just written but those are my opinions. In the meantime, look around and ask yourself this question.

Did all this always exist? The universe. The solar system, Humans. Animal and insects. In fact everything that is not man made.  None of it always existed.  I know for myself after doing what I just suggested I became a believer because I couldn’t find any other answer except to believe in what is written in the Bible.

All I have to say to you unbelievers just pick up a Bible, and I promise you, it will not cause you any harm and try to live your life according to the commandments it contains. I’m not in a sense trying to change your way of thinking but give yourself a chance because after your life is over here on Earth, you might be in for a surprise.

I've mentioned before I am not a preacher in fact far from it.  It’s all a mystery to me to, but like I said look around.

Have a good day and may God bless you.

Oh, and Merry Christmas.
Posted by Unknown at 11:10 AM