I had never been on Facebook until some one told me it was a fun site. So I checked it out. I went on it only to find out that its not that funny and mostly at times its depressing and boring. 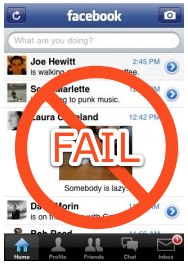 As usual there are some brainless individuals that don't know how to use proper language on a site that is suppose to be entertaining. Some will threaten to kick the hell out of someone and they will use the most foul language. For others, it' just repetition of the same thing over and over every day. Some people spend time on it trying to degrade somebody else's reputation. And of course some people use it to tell the world how miserable their life is.
Those are the depressing people. Don't get me wrong I'm not condemning everyone on Facebook, just the ones that act like I mentioned. But there's a lot of them.  I don't think it's just the people I've 'friended' either - the depression and stupidity extends to friends of friends and a pretty wide circle.  I can only assume there are large portions of Facebook fit this profile.
There's other types of people on Facebook though. There's the ones that plays those games on Facebook. They seem to enjoy themselves - they play their games and don't bother anyone. They're just happy to let you know of what their score was. There's absolutely nothing wrong with that.
I read this morning Facebook is losing subscribers. If you are a civilized person that uses Facebook, ignore the ones that are making Facebook lose subscribers.  Delete them  or just ignore them at least.  If they are friends they will eventually realize that you don't agree with the garbage that they put on Facebook.
One last point related to adding friends on Facebook. You can add friends that you don't know and the only way you will find out what kind of friend they turn out to be is to add them. Some people can be friends at a distance rather than close by. You may only be friends via Facebook. That's fine - unless they turn out to be brainless jerks.    Going back to Facebook losing subscribers, if you want to keep Facebook on a path that is worthwhile just delete these brainless individuals. Otherwise what will happen is that some people will sign out because of the problems I mentioned above, and not bother to come back.  Of course there's people sign out because they realize they've spent too much time on Facebook and have other things to do for a while.  And some figure they spend to much time so they take a break . But there's a difference between signing out because you enjoy it too much and signing out because there are so many jerks on there.
That's my rant of the day.
Posted by Unknown at 7:45 AM