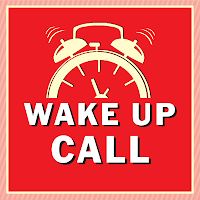 We are due for a wake-up call and it shouldn't be too long from now. If reports are to be believed on the activities of India, Pakistan, Iran and North Korea. Pakistan and India have border problems, Iran is  suspected of trying to acquire nuclear weapons, and North Korea suspects the USA wants to attack them and they are using this as an excuse to build nuclear weapons.

Then you have leaders like Assad from Syria. Who doesn't mind killing his own people because he knows that Iran and China and/or the Russians would back him up if NATO would get involved. This would be enough to start a nuclear war.

And we have terrorist groups who don’t care who they kill, because for them life is cheap.

To me all these problems are caused because of failed diplomacy and inaction except sanctions.  With some, it doesn't seem to be working and diplomacy doesn't seem to work either. In an earlier post I compared the USA to the king of the jungle but then I changed it to the lamb of the jungle because it’s all diplomacy with no actions and the enemies of the USA realize this and they just don’t need to fear the USA anymore because they know nothing will be done in response to their action except to talk more.

I will go as far as to saythat if a war breaks out the USA will be attacked by so many sides that it will not have a chance of survival, as the enemies of the USA have enough time to organize such a plan. We know at least some of us civilized people that if a war was to start it would be nuclear and the ones that are not killed outright will suffer and die from the radiation.

This is my beef of today against some of these leaders that don’t understand what diplomacy is all about and are willing to sacrifice the whole world including themselves to obtain or have greater powers.
Posted by Unknown at 1:07 PM