Do this for fun 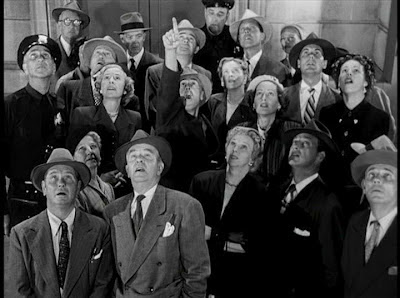 Do you want to have fun?  Here is what you do. We all know that the human species are a curious lot. Friends and I used to pull this stunt on the corner of Banks street and Somerset street in Ottawa years ago.

We would go and stand on the corner and start pointing up and one of us would say, "there is another".  The other one would respond "Yes I see it!".  Then another buddy of ours would say "There’s another


Eventually one other person would come up and ask what  we saw.  One of us would answer that we didn't know what it was but it sure was strange looking.  Soon another person would start looking up and the first thing you knew according to most of them there was all kinds of flying things up there because everyone would see something that wasn't really there.

Then my freinds and I would walk away and just stand there a few feet away  and watch to see how many people would see something. There was nothing to be seen. When we had nothing else to do we used to go to that corner and start seeing what was not there.  But according to a lot of people everything was up there. In those days the police would walk on their beat and we also got a couple of them involved.  We really got a laugh at that.

We chose that corner because Bank Street is always busy. Night and day. Even to this day adult or not you can chose any corner street  that is busy and do the same thing and you would be surprised to how many UFOs there are up there according to the curious that will join in and actually see something that isn't there.

Have a good day.

P.S.  This has nothing to do with my earlier post about having a heart attack - I'm not playing a trick on you.
Posted by Unknown at 8:01 PM