The U.S.A. claims to have a president 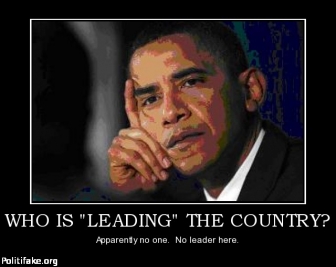 The U.S.A. claims to have a president, but if so where is he? Now keep in mind I wrote this before Obama's speech about ISIS last night but that speech doesn't change my mind. The president has been missing in action for years. And when he's not missing, he's missing the best decision and going with probably the worst one. Maybe missing isn't such a bad thing for this guy. I don’t believe that the U.S.A. has a president and if they have one, then he should just resign and go visit Kenya because he's making every situation that he touches, worse.

And while I'm at it, here's a note note for Mr. Holder: this man will put me down as being a racist for criticizing president Obama. Don't bother. I know you like doing that when anyone criticizes black people or in fact anyone who isn't white. Well, I'm allowed to criticize the president without being a racist. Race is not the only reason someone would criticize someone else. In my case it has to do with the president's incompetence. That's not because he's black, it's because he doesn't know what he's doing but thinks he really does.

Since president Obama who is supposed to be a leader has done everything in his power to diminish the stature and strength of the U.S.A., he is either doing all of this stuff deliberately or he is just clueless. In either case, he's damaging the country and that's not a leader. What's he done to make me feel this way? He's reduced the size and strength of the military. He's alienated friendly countries. He's had scandals over corruption and politically prosecuting his political enemies using the IRS. And it seems that anything that happens that would require him to be at the White House instead finds him off on a golf course or somewhere else. It seems that whenever something should be taken care of in an emergency, he’s never around to do it.

He has made the USA a laughing stock throughout the world and also made himself the joke of the world. I've read all the comments on website that I can find about the politics in the U.S.A., and when it comes to Mr. Obama I find that he has been called every name that is in a dictionary and some more that can’t be written down.

That’s what happens when you have a disease called Ego. With this disease everyone is wrong except the person that has this sickness. Having this sickness doesn’t allow for any friends and causes no cooperation from others. Mr. Obama, why don’t you do the right thing and resign while you still have some people that look up to you? Deep down I don’t believe that you are a bad person but from what I read and hear you making speeches it’s not you. You try and make people believe you but by your contradiction of your own words and actions you’re deceiving yourself and the citizens. To be honest there could be some element of racism in your surroundings. But those are excuses. A leader leads, not complains.

That's my rant today.
Posted by Unknown at 2:59 PM

Email ThisBlogThis!Share to TwitterShare to FacebookShare to Pinterest
Labels: Obama, president, supposed to be leader