The Queen is gone 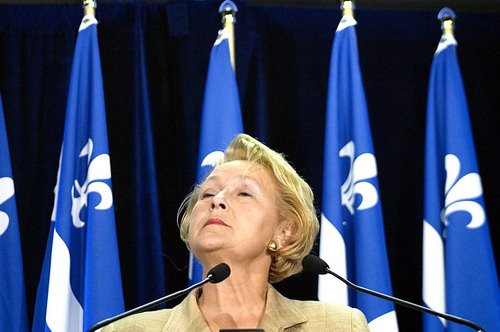 Yes, the Queen of the separatists in the Province of Québec is gone. In the recent provincial election, she even lost her seat in her own riding. Now as citizens of Quebec we are stuck with the Liberals once again.

Now what I’m asking myself is why there aren't a Conservative and NDP party on a ballot in the provincial elections of Québec. The last election we did away with the Liberals by voting for the Parti Quebecois. As we did not want the Liberals anymore. Now this time we voted for the Liberals to do away with the PQ. We had other choices but little was known about these other parties. I don’t know why we do not have them as we are part of Canada just like other provinces.

The people here have shown that if a group of politicians here start talking about separation you can be sure that on the following elections they will be gone. The citizens here realize that this province could not survive as a country by itself and many also realize that bill C101 is not doing the province much good either. This country has two languages -- French and English. If the English language is not accepted here in this province, how can we expect anyone from Ontario (at least) to come over to open a business? New businesses would profit the province and also prop up the economy.  So why discourage that?

The citizens here are not afraid that the French language will disappear, it’s just the politicians using that as an excuse for wanting more power for themselves.  Ordinary citizens understand that as well, I think.

Now, I’m anxious to hear what some eggheads will have to say when they call the Lowell Green talk show on the radio station CFRA. I would be willing to bet that some egghead from Ottawa will get on that station and say look what they did - they elected the Liberals. Now those eggheads must have been disappointed to hear that separation was dead. They will have something to say because they are the type of people that poke their noses into something that they don’t know enough about and they make up their minds on just hearsay. These are the type of people that create more problems in this world.