Resignation is the answer? 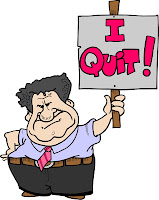 I guess when you sense that you might get in trouble for something that you did or something you can’t do,.resignation is the answer.

I was reading about the Pope resigning this month. It’s been reported that it was because of his age. True, he is up there in the 80’s but is it because of his age? Or was he discouraged by all of the sexual assaults that have been committed on little kids and that he can’t do anything about it? Or was it because there have been cover ups all over from different parishes? With Catholicism on the decline in many countries maybe he felt there was too big of a challenge in growing the church.  And with him being up there in age, it all comes down to it being too big of a headache for him.  So what to do?  Resign I guess.

I guess he figures it's best to leave the problems to someone else.  That's just like ex-Premier of Ontario Daulton McGuinty of the Liberal party did. After screwing the people of Ontario and lowering the province into a have-not situation, he decided to step down - resign - and leave the headaches to a successor.

Resigning seems to be the easy way out.  In the Pope's case it's more understandable than it is for the Premier of Ontario.  The Pope didn't cause all the problems he faced, and he didn't have the energy of youth on his side to tackle them all.  McGuinty created his own problems, covered them up and then fled.  But resigning seems to me to be an easy way out.  Even in the Pope's case, it's customarily a job for life.  If you don't want the job, don't take it.  And if you caused the problems (in McGuinty's case), resigning is only a good option if you are incapable of fixing them.  Sadly, the voters of Ontario didn't force his resignation in previous elections before he did all that damage.
Posted by Unknown at 7:18 AM