What is this World coming to? 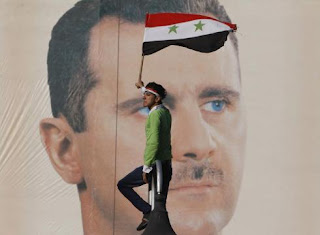 What is this world coming to when some nations will let a nation murder its own citizens by the thousands? This is exactly what is happening in Syria and it seems like the fat cat has friends that do not want any nation to go and take him out. I guess that these nations like Iran, Russia and China are willing to let people get murdered just because they are getting what ever they need at a good price.  Or perhaps what they need from this nation they can’t get anywhere else. It's not oil. It's got to be ideological or political camaraderie.  But I guess in that part of the world that's what matters, and life is cheap.
What is happening in Syria is genocide and yet just two nations (China and Russia) vetoed other nations from going in to stop all the killings.  Nothing is being done to stop this slaughtering of the people that just want to be free in their own country.

I don’t know how many seats there are in the U. N. But you would think that there would be enough seats to prevent just two nations from preventing the world from doing what is right.
Now Assad claims that there are terrorist that are committing murders in Syria and according to the reports that I've read and heard from the reporters it seems to be true. These two countries that voted against some other nations from going in there to stop this or are they willing to let the Taliban or other terrorist take over and make life more miserable and continue on killing people?
I say this. Assad should be taken out and let NATO get in there and clear the country of Assad and the terrorist that could be found because once the terrorist takes over the country then I’m sure we would have another nation just as bad as Iran.
In those countries it seems that the word diplomacy does not mean anything to them but killing of their own people that is their diplomacy.
I could be right and I could be wrong but I’m only writing  by what I read and hear.
This is my rant of the day.
Have a good day.
Posted by Unknown at 7:21 PM