They all look good

They all look good. What I mean is they look good and end up being good-looking pieces of garbage. What are 'they'? Most of the things made today are not made for quality but for looks and with the expectation that consumers are stupid enough to fall for looks instead of quality. They are typically right.
Most of the things or gadgets (whatever you want to call them) are mostly made of some kind of plastics or some other kind of inferior material.
Toasters and coffee brewers. 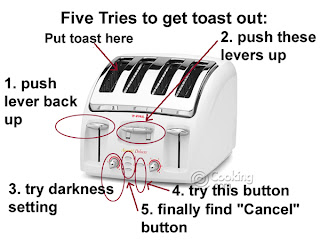 I walked in to a store one day to buy a good toaster. While looking around the store I spotted some toasters. I went over to take a look and they had one the type that I was looking for - a 4 slice toaster made by Black and Decker and you could even put a bagel in. I bought it then went home happy to have found what I was seeking.
At night before going to bed I always have my 4 slices of toast and coffee. I got my bread took 4 slices out and made sure the setting was what I wanted. About a minute later my toast came up - or I should say charcoal. I tried everything that I could think of to get it working right but no way. The next morning I threw it in the garbage. Later on that day my grand daughter and fiance came down and saw that I did not have a toaster so the next time they came down they bought me a 4 slice toaster on the way.
The next morning I figured I'd have my toast and coffee so I put 4 slices in then pressed the little handle down and right away I saw a spark and heard a little noise. Then I went and sat down and waited for my toast to come up. After a couple minutes my toast had not come up so I got up to see why they had not and I noticed that they never got toasted at all the darn toaster had already broken. The next good looking piece of garbage was put where it belong in the garbage. It was a Black and Decker too.
Coffee brewers / Coffee makers
I don’t know how many off these things I had bought before I could find one that I wanted that would actually, you know, last. I finally found one that I wanted (it was a Cuisinart 'two to go'). This one has lasted me quite a long time but the only thing that’s wrong with it is of course, that it's made out of some kind of plastic.  The lid where you raise it to put the coffee in is plastic of some sort. When the water heats up enough to boil the lid twist up and if its under a shelf that’s just above the counter top then what ever is in that cupboard gets all wet from the steam. The brewer itself I can honestly say its good except for what I mentioned.  But even the one I like, isn't perfect.
It's still cheaply made. Do I blame the manufacturers?  Cheap Chinese labor? Society for wanting everything to cost cheap? I guess what's most important is that despite the fact that they all look good, they typically stink.  Especially toasters.  That is my rant for today, but I'm not done with this one.
My next rant will be on bread machines and their recipes.
Posted by Unknown at 6:40 AM